Gig Magazine | Still Trying to Get Along

Still Trying to Get Along

Playing an instrument and accompanying another musician or singer are totally separate issues. As a piano player, playing for singers has always been a challenge for me, and I’ve made a point to let singers know it’s not my strong point. My reading has always been slow and I’ve never mastered those nuances that make a good accompanist. And yet, I’ve had the opportunity to work with some great singers who were probably impressed more by my 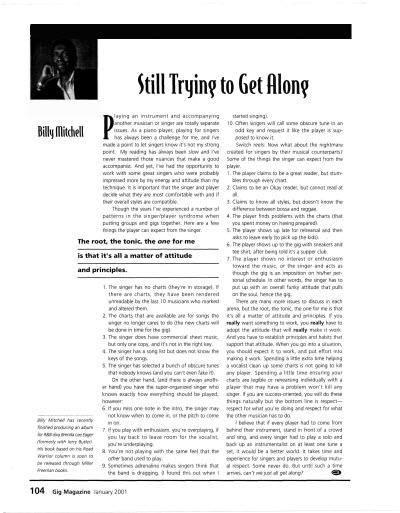 energy and attitude than my technique. It is important that the singer and player decide what they are most comfortable with and if their overall styles are compatible.

Though the years I’ve experienced a number of patterns in the singer/player syndrome when putting groups and gigs together. Here are a few things the player can expect from the singer.

The root, the tonic, the one for me is that it’s all a matter of attitude and principles.

On the other hand, (and there is always anoth­er hand) you have the super-organized singer who knows exactly how everything should be played, however:

Some of the things the singer can expect from the player.

There are many more issues to discuss in each arena, but the root, the tonic, the one for me is that it’s all a matter of attitude and principles. If you really want something to work, you really have to adopt the attitude that will really make it work. And you have to establish principles and habits that support that attitude. When you go into a situation, you should expect it to work, and put effort into making it work. Spending a little extra time helping a vocalist clean up some charts is not going to kill any player. Spending a little time ensuring your charts are legible or rehearsing individually with a player that may have a problem won’t kill any singer. If you are success-oriented, you will do these things naturally but the bottom line is respect— respect for what you’re doing and respect for what the other musician has to do.

I believe that if every player had to come from behind their instrument, stand in front of a crowd and sing, and every singer had to play a solo and back up an instrumentalist on at least one tune a set, it would be a better world. It takes time and experience for singers and players to develop mutu­ al respect. Some never do. But until such a time arrives, can’t we just all get along?