Jealousy is a miserable emotion. It is perhaps the worst of all emo­tions because it is the breeding ground for so many other negative feel­ings. It’s a maddening cycle that destroys happiness by creating conflict, resentment, anger and hatred. No matter how righteous you may try to be, you’ve probably experienced some level of envy, if not pure jealousy. We deny those covetous feelings that arise when in the presence of people who have things we want and do not have. We become angry when we see oth­ers obtain success and riches as our talents go unnoticed. 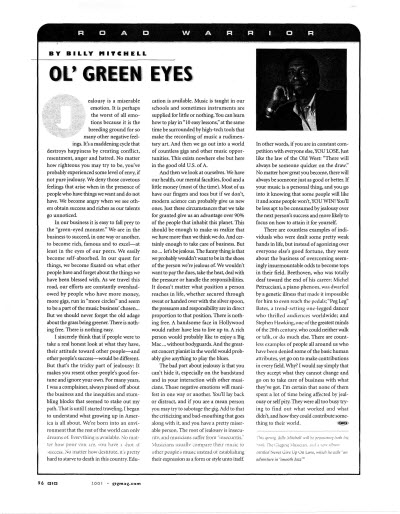 In our business it is easy to fall prey to the “green-eyed monster.” We are in the business to succeed, in one way or another, to become rich, famous and to excel—at least in the eyes of our peers. We easily become self-absorbed. In our quest for things, we become fixated on what other people have and forget about the things we have been blessed with. As we travel this road, our efforts are constantly overshad­owed by people who have more money, more gigs, run in “more circles” and seem to be a part of the music business’ chosen… But we should never forget the old adage about the grass being greener. There is noth­ing free. There is nothing easy.

I sincerely think that if people were to take a real honest look at what they have, their attitude toward other people—and other people’s success—would be different. But that’s the tricky part of jealousy: It makes you resent other people’s good for­tune and ignore your own. For many years, I was a complainer, always pissed off about the business and the inequities and stum­bling blocks that seemed to stake out my path. That is until I started traveling. I began to understand what growing up in Amer­ica is all about. We’re born into an envi­ronment that the rest of the world can onlv dream of. Everything is available. No mat­ter how poor you are, you have a shot at success. No matter how destitute, it’s pretty hard to starve to death in this country. Education is available. Music is taught in our schools and sometimes instruments are supplied for little or nothing. You can learn how to play in “10 easy lessons,” at the same time be surrounded by high-tech tools that make the recording of music a rudimen­tary art. And then we go out into a world of countless gigs and other music oppor­tunities. This exists nowhere else but here in the good old U.S. of A.

And then we look at ourselves. We have our health, our mental faculties, food and a little money (most of the time). Most of us have our fingers and toes but if we don’t, modern science can probably give us new ones. Just these circumstances that we take for granted give us an advantage over 90% of the people that inhabit this planet. This should be enough to make us realize that we have more than we think we do. And cer­tainly enough to take care of business. But no… let’s be jealous. The funny thing is that we probably wouldn’t want to be in the shoes of the person we’re jealous of. We wouldn’t want to pay the dues, take the heat, deal with the pressure or handle the responsibilities. It doesn’t matter what position a person reaches in life, whether secured through sweat or handed over with the silver spoon, the pressures and responsibility are in direct proportion to that position. There is noth­ing free. A handsome face in Hollywood would rather have less to live up to. A rich person would probably like to enjoy a Big Mac… without bodyguards. And the great­est concert pianist in the world would prob­ably give anything to play the blues.

The bad part about jealousy is that you can’t hide it, especially on the bandstand and in your interaction with other musi­cians. Those negative emotions will mani­fest in one way or another. You’ll lay back or distract, and if you are a mean person you may try to sabotage the gig. Add to that the criticizing and bad-mouthing that goes along with it, and you have a pretty miser­able person. The root of jealousy is insecu­rity, and musicians suffer from “insecuntis.” Musicians usually compare their music to other people’s music instead of establishing their expression as a form or style unto itself.

In other words, if you are in constant com­petition with everyone else, YOU LOSE. Just like the law of the Old West: “There will always be someone quicker on the draw.” No matter how great you become, there will always be someone just as good or better. If your music is a personal thing, and you go into it knowing that some people will like it and some people won’t, YOU WIN! You’ll be less apt to be consumed by jealousy over the next person’s success and more likely to focus on how to attain it for yourself.

There are countless examples of indi­viduals who were dealt some pretty weak hands in life, but instead of agonizing over everyone else’s good fortune, they went about the business of overcoming seem­ingly insurmountable odds to become tops in their field. Beethoven, who was totally deaf toward the end of his career; Michel Petrucciani, a piano phenom, was dwarfed by a genetic illness that made it impossible for him to even reach the pedals; “Peg Leg” Bates, a trend-setting one-legged dancer who thrilled audiences worldwide; and Stephen Hawking, one of the greatest minds of the 20th century, who could neither walk or talk, or do much else. There are count­ less examples of people all around us who have been denied some of the basic human attributes, yet go on to make contributions in every field. Why? I would say simply that they accept what they cannot change and go on to take care of business with what they’ve got. I’m certain that none of them spent a lot of time being affected by jeal­ousy or self pity. They were all too busy try­ing to find out what worked and what didn’t, and how they could contribute some­thing to their world.