We’ve all played them. How do you avoid the “Gig from Hell?” There are certain gigs that will come along that not only aren’t worth taking, but should be avoided at all costs. In our business, because we often have to take work as it comes, we must be flexible enough to deal with a wide range of situations, no matter how intolerable they are. But there are limits to everything. As professionals, we have to grit our teeth and put on “the face,” often smiling through a barrage of insults. We go home with the money, but kick the dog as we enter the house. There are usually signs that will let you know that a pass would be in order. 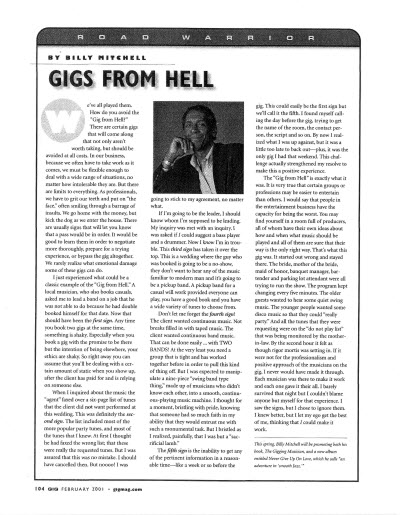 It would be good to learn them in order to negotiate more thoroughly, prepare for a trying experience, or bypass the gig altogether. We rarely realize what emotional damage some of these gigs can do.

I just experienced what could be a classic example of the “Gig from Hell.” A local musician, who also books casuals, asked me to lead a band on a job that he was not able to do because he had double booked himself for that date. Now that should have been the first sign. Any time vou book two gias at the same time, something is shaky. Especially when you book a gig with the promise to be there but the intention of being elsewhere, your ethics are shaky. So right away you can assume that you’ll be dealing with a cer­tain amount of static when you show up, after the client has paid for and is relying on someone else.

When I inquired about the music the “agent” faxed over a six-page list of tunes that the client did not want performed at this wedding. This was definitely the sec­ond sign. The list included most of the more popular party tunes, and most of the tunes that I knew. At first I thought he had faxed the wrong list; that these were really the requested tunes. But I was assured that this was no mistake. I should have cancelled then. But noooo! I was going to stick to my agreement, no matter what.

If I’m going to be the leader, I should know whom I’m supposed to be leading. My inquiry was met with an inquiry. I was asked if I could suggest a bass player and a drummer. Now I know I’m in trou­ble. This third sign has taken it over the top. This is a wedding where the guy who was booked is going to be a no-show, they don’t want to hear any of the music familiar to modern man and it’s going to be a pickup band. A pickup band for a casual will work provided everyone can play, you have a good book and you have a wide variety of tunes to choose from.

Don’t let me forget the fourth signl The client wanted continuous music. Not breaks filled in with taped music. The client wanted continuous band music. That can be done easily… with TWO BANDS! At the very least you need a group that is tight and has worked together before in order to pull this kind of thing off. But I was expected to manip­ulate a nine-piece “swing band type thing,” made up of musicians who didn’t know each other, into a smooth, continu­ous-playing music machine. I thought for a moment, bristling with pride, knowing that someone had so much faith in my ability that they would entrust me with such a monumental task. But I bristled as I realized, painfully, that I was but a “sac­rificial lamb.”

The fifth sign is the inability to get any of the pertinent information in a reason­able time—like a week or so before the gig. This could easily be the first sign but we’ll call it the fifth. I found myself call­ing the day before the gig, trying to get the name of the room, the contact per­son, the script and so on. By now 1 real­ized what I was up against, but it was a little too late to back out—plus, it was the only gig I had that weekend. This chal­lenge actually strengthened my resolve to make this a positive experience.

The “Gig from Hell” is exactly what it was. It is very true that certain groups or professions may be easier to entertain than others. I would say that people in the entertainment business have the capacity for being the worst. You may find yourself in a room full of producers, all of whom have their own ideas about how and when what music should be played and all of them are sure that their way is the only right way. That’s what this gig was. It started out wrong and stayed there. The bride, mother of the bride, maid of honor, banquet manager, bar­tender and parking lot attendant were all trying to run the show. The program kept changing every five minutes. The older guests wanted to hear some quiet swing music. The younger people wanted some disco music so that they could “really party.” And all the tunes that they were requesting were on the “do not play list” that was being monitored by the mother-in-law. By the second hour it felt as though rigor mortis was setting in. If it were not for the professionalism and positive approach of the musicians on the gig, I never would have made it through. Each musician was there to make it work and each one gave it their all. I barely survived that night but I couldn’t blame anyone but myself for that experience. I saw the signs, but 1 chose to ignore them. I knew better, but I let my ego get the best of me, thinking that I could make it work.

This spring, Billy Mitchell will be promoting both his book. The Gigging Musician, and a new album entitled Never Give Up On Love, which he calls “an adventure in smooth Jazz.'”