Favors. Just about every­one at one time or another has been over­come by the desire to doing something won­derful for someone else. It’s a part of our nature. Some people live to do for others, entangling themselves in other people’s problems. These types are generally viewed as “do-gooders” or described, clinically, as “code-pendent.” Often the continual favor-giver gets in the way of the natural flow of events. On the other hand we have the social Scrooges who would rather burn in hell than do something nice for someone else. You, like most people, probably 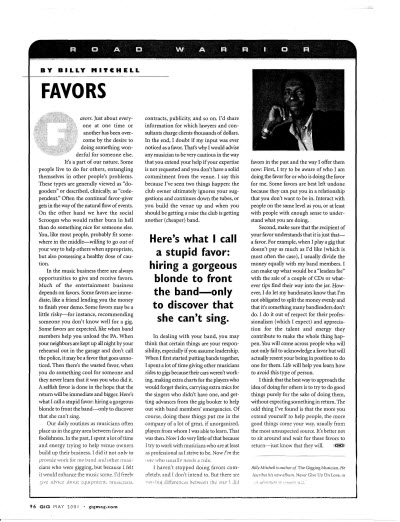 fit some­where in the middle—willing to go out of your way to help others when appropriate, but also possessing healthy dose of cau­tion.

In the music business there are always opportunities to give and receive favors. Much of the entertainment business depends on favors. Some favors are imme­diate, like a friend lending you the money to finish your demo. Some favors may be a little risky—for instance, recommending someone you don’t know well for a gig. Some favors are expected, like when band members help you unload the PA. When your neighbors are kept up all night by your rehearsal out in the garage and don’t call the police, it may be a favor that goes unno­ticed. Then there’s the wasted favor, when you do something cool for someone and they never learn that it was you who did it. A selfish favor is done in the hope that the return will be immediate and bigger. Here’s what I call a stupid favor: hiring a gorgeous blonde to front the band—only to discover that she can’t sing.

Our daily routines as musicians often place us in the gray area between favor and foolishness. In the past, I spent a lot of time and energy trying to help venue owners build up their business. I did it not onlv to provide work tor mv band and other musi­cians who were gigging, but because I felt it would enhance the music scene. I’d freelv give advice about equipment, musicians, contracts, publicity, and so on. I’d share information for which lawyers and con­sultants charge clients thousands of dollars. In the end, I doubt if my input was ever noticed as a favor. That’s why I would advise any musician to be very cautious in the way that you extend your help if your expertise is not requested and you don’t have a solid commitment from the venue. I say this because I’ve seen two things happen: the club owner ultimately ignores your sug­gestions and continues down the tubes, or you build the venue up and when you should be getting a raise the club is getting another (cheaper) band.

In dealing with your band, you may think that certain things are your respon­sibility, especially if you assume leadership. When I first started putting bands together, I spent a lot of time giving other musicians rides to gigs because their cars weren’t work­ing, making extra charts for the players who would forget theirs, carrying extra mics for the singers who didn’t have one, and get­ting advances from the gig booker to help out with band members’ emergencies. Of course, doing these things put me in the company of a lot of great, if unorganized, players from whom I was able to learn. That was then. Now I do very little of that because I try to work with musicians who are at least as professional as 1 strive to be. Now I’m the ‘. »ne who usually needs a ride.

1 haven’t stopped doing favors com­pletely, and I don’t intend to. But there are two big differences between did favors in the past and the way I offer them now: First, I try to be aware of who I am doing the favor for or who is doing the favor for me. Some favors are best left undone because they can put you in a relationship that you don’t want to be in. Interact with people on the same level as you, or at least with people with enough sense to under­stand what you are doing.

Second, make sure that the recipient of your favor understands that it is just that— a favor. For example, when I play a gig that doesn’t pay as much as I’d like (which is most often the case), I usually divide the money equally with my band members. I can make up what would be a “leaders fee” with the sale of a couple of CDs or what­ever tips find their way into the jar. How­ever, I do let my bandmates know that I’m not obligated to split the money evenly and that it’s something many bandleaders don’t do. I do it out of respect for their profes­sionalism (which I expect) and apprecia­tion for the talent and energy they contribute to make the whole thing hap­pen. You will come across people who will not only fail to acknowledge a favor but will actually resent your being in position to do one for them. Life will help you learn how to avoid this type of person.

I think that the best way to approach the idea of doing for others is to try to do good things purely for the sake of doing them, without expecting something in return. The odd thing I’ve found is that the more you extend yourself to help people, the more good things come your way, usually from the most unsuspected source. It’s better not to sit around and wait for these favors to return—just know that they will.

Billy Mitchell is author of The Gigging Musician. He describes his new album. Never Give Up On Love, as and adventure in smooth jazz.