One thing that is natural to most human beings (and most necessary in human interaction) is verbal communication. Without communication there would be limited exchange of ideas and information which would mean a much slower pace of human development. Communication has moved from the grunt to the Inter­net in just a few thousand years. But for all of its sophistication the purpose of communication remains the same: to get something done! 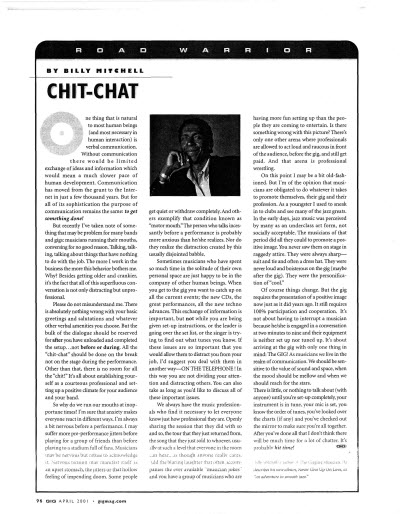 But recently I’ve taken note of some­thing that may be problem for many bands and gigs: musicians running their mouths, conversing for no good reason. Talking, talk­ing, talking about things that have nothing to do with the job. The more I work in the business the more this behavior bothers me. Why? Besides getting older and crankier, it’s the fact that all of this superfluous con­versation is not only distracting but unpro­fessional.

Please do not misunderstand me. There is absolutely nothing wrong with your basic greetings and salutations and whatever other verbal amenities you choose. But the bulk of the dialogue should be reserved for after you have unloaded and completed the setup…not before or during. All the “chit-chat” should be done on the break not on the stage during the performance. Other than that, there is no room for all the “chit!” It’s all about establishing your­self as a courteous professional and set­ting up a positive climate for your audience and your band.

So why do we run our mouths at inop­portune times? I’m sure that anxiety makes everyone react in different ways. I’m always a bit nervous before a performance. I may suffer more pre-performance jitters before playing for a group of friends than before playing to a stadium full of fans. Musicians may be nervous but refuse to acknowledge it. Nervous tension may manifest itself as upset stomach, the jitters or that hollow felling of impending doom. Some people get quiet or withdraw completely. And oth­ers exemplify that condition known as “motor mouth.” The person who talks inces­santly before a performance is probably more anxious than he/she realizes. Nor do they realize the distraction created by this usually disjointed babble.

Sometimes musicians who have spent so much time in the solitude of their own personal space are just happy to be in the company of other human beings. When you get to the gig you want to catch up on all the current events; the new CDs, the great performances, all the new techno advances. This exchange of information is important, but not while you are being given set-up instructions, or the leader is going over the set list, or the singer is try­ing to find out what tunes you know. If these issues are so important that you would allow them to distract you from your job, I’d suggest you deal with them in another way—ON THE TELEPHONE! In this way you are not dividing your atten­tion and distracting others. You can also take as long as you’d like to discuss all of these important issues.

We always have the music profession­als who find it necessary to let everyone know just how professional they are. Openly sharing the session that they did with so and so, the tour that they just returned from, the song that they just sold to whoever, usually at such a level that evervone in the room can hear…as though anyone really cares. Add the blaring laughter that often accompanies the ever available “musician jokes” and you have a group of musicians who are having more fun setting up than the peo­ple they are coming to entertain. Is there something wrong with this picture? There’s only one other arena where professionals are allowed to act loud and raucous in front of the audience, before the gig, and still get paid. And that arena is professional wrestling.

On this point I may be a bit old-fash­ioned. But I’m of the opinion that musi­cians are obligated to do whatever it takes to promote themselves, their gig and their profession. As a youngster I used to sneak in to clubs and see many of the jazz greats. In the early days, jazz music was perceived by many as an underclass art form, not socially acceptable. The musicians of that period did all they could to promote a pos­itive image. You never saw them on stage in raggedy attire. They were always sharp— suit and tie and often a dress hat. They were never loud and boisterous on the gig (maybe after the gig). They were the personifica­tion of “cool.”

Of course things change. But the gig requires the presentation of a positive image now just as it did years ago. It still requires 100% participation and cooperation. It’s not about having to interrupt a musician because he/she is engaged in a conversation at two minutes to nine and their equipment is neither set up nor tuned up. It’s about arriving at the gig with only one thing in mind: The GIG! As musicians we live in the realm of communication. We should be sen­ sitive to the value of sound and space, when the mood should be mellow and when we should reach for the stars. There is little, or nothing to talk about (with anyone) until you’re set-up completely, your instrument is in tune, your mic is set, you know the order of tunes, you’ve looked over the charts (if any) and you’ve checked out the mirror to make sure you’re all together. After you’ve done all that I don’t think there will be much time for a lot of chatter. It’s probablv hit time!